What would be your gut reaction if you were to learn that on average a human has 3 bacterial cells for each human cell? That’s a 3:1 ratio of bacteria to human. 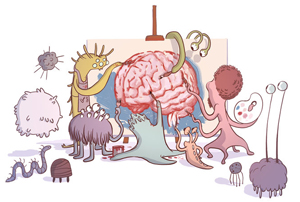 This is called the human microbiome; it is our own personal ecosystem – and for a long time we’ve known how it plays an important part in our health regarding digestion and immune systems. More recently, research is showing that our “gut reaction” can also influence how we think – our gut is communicating with our brain. Our enteric nervous system, the nervous system encompasses our gut, is often referred to as the “second brain”; it is so complex that it can operate independent of our primary brain – but also communicates back and forth with it.

We call something a “gut reaction” because its something we have not filtered through our primary brain.

The video below explain how the human microbiome works, and how gut reactions can impact how we react to the world around us. This exciting research shows the potential for microbe therapy to treat issues such as anxiety, autism and depression.

While most experiemnts have been on mice, there have been some human research which confirms the theory that our gut influences our brain. One human study involved health participants and yogurt. One of the better known examples concerns concerns store bought yogurt and human brain scans.

Half the group in the experiemnt ate a cup of yogurt twice a day, and the other half did not. The subjects particpated in a brain scan exercise to register their reactions to various images inteneded to evoke a variety of emotions – happiness, sadness, stress. After 4 weeks, the yogurt eating group showed significant differences in brain activity regarding how they reacted to negative images – their brain scans showed them reacting more calmly then the group that did not eat the yogurt.

As most people know, yogurt contains live bacteria which is why doctors will often recommend that people on antibiotics eat yogurt to replace good microbes that might be killed off by the antibiotic.

You Have A Second Brain

The Invisible Universe Of The Human Microbiome

Mind-altering microbes: how the microbiome affects brain and behavior: Elaine Hsiao at TEDxCaltech